Resistance is built on hope.

"Love casts out fear the way light casts out darkness. In the presence of one the other is gone." ~ Marianne Williamson


The hashtag #lovetrumpshate, while I agree with the sentiment, it does not sit well with me. I am war-weary and fatigued of the mud slinging on both sides of our politically and racially divided country.


"Protecting ourselves and others does not violate ahimsa. Practicing ahimsa means we take responsibility for our own harmful behavior and attempt to stop the harm caused by others. Being neutral is not the point. Practicing true ahimsa springs from the clear intention to act with clarity and love." ~ Judith Lasater

The answer to violence (in words or deed) is non-violence. It is love. "Love liberates." (Maya Angelou) Being a bully to a bully doesn't present a peaceful solution or the desired results. In my own experience the cycle of blame, shame and slinging back heated comments and remarks just fuels the flame.


Ahimsa is not causing pain in thought, word, or deed to yourself or others. Avoiding comparison or competition with others. Avoiding gossip and negative self-talk. It is not "no pain, no gain" in regards to asana practice or in worldly efforts. By cultivating respect for yourself, ahimsa honors you and others. Perhaps it is why many of us practice physical asana in yoga. We are looking for a deeper awareness within ourselves.

With that awareness, we have the ability to create healthy boundaries that allow for healing within and with each other. What good is that awareness if we do not take it into our own home or into the world?

Could it be as simple as this: heart open, mind open to listening with the intent of being changed by what we hear? The catch is both parties have to be willing. Even with differing beliefs, we are all still the same. Have you seen this viral video? Take 3 minutes now.

Tapas is accepting but not causing suffering (ahimsa) in order to purify the body and mind. Tapas is the ultimate self-discipline, which is the power to control the body and it's senses. If we accept everything (finding the benefit even in painful situations or circumstances) or even happiness (which is temporary also), what can affect us?

A non-violent revolution is exactly the essence of what John Lewis, famed civil rights leader, shared with OnBeing in a recent podcast featuring civil liberties. He shared that the only true integration existed within the movement itself. It did not matter black or white, north or south,  for those that were in the struggle for equality, they were one. He shared how they resisted: studying, preparing their minds, practicing peaceful actions such as maintaining eye contact, no slouching, no talking, being friendly and courteous. They practiced role playing of inter-racial groups using mock harassment, name calling, and what to do when someone kicked or spit on you. They wanted people to feel like they were in the actual situation, that it could happen. When beaten, they were taught to protect the most sensitive parts of their body, to look out for one another, and to look those attacking you in the eye because it was disarming to them. 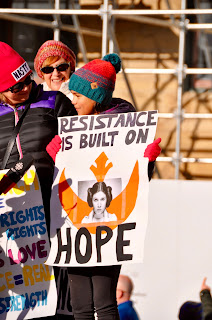 “Take a long, hard look down the road you will have to travel once you have made a commitment to work for change. Know that this transformation will not happen right away. Change often takes time. It rarely happens all at once. In the movement, we didn't know how history would play itself out. When we were getting arrested and waiting in jail or standing in unmovable lines on the courthouse steps, we didn’t know what would happen, but we knew it had to happen.

Use the words of the movement to pace yourself. We used to say that ours is not the struggle of one day, one week, or one year. Ours is not the struggle of one judicial appointment or presidential term. Ours is the struggle of a lifetime, or maybe even many lifetimes, and each one of us in every generation must do our part. And if we believe in the change we seek, then it is easy to commit to doing all we can, because the responsibility is ours alone to build a better society and a more peaceful world.” ~ John Lewis

The civil rights leaders at that time had a belief and hope that somehow things are going to get better. A sense of faith that what they were moving toward was already done and already won. Living as if they were already there in that unified, de-segregated community as a part of One family. "If you can even have faith that it is there. For you, it is there."

Let's keep walking and moving forward on this non-violent path together. Starting with ourselves, our own children and communities and on a broader scale act and respond as if the peace were already present. Propelled by hope, we are already one.

We can resist. But as we continue to learn from history, there are specific, strategic and powerful non-non-violent ways of doing so. I'd love to hear what you're doing. Here's some things I'm doing (see this link).

“You are a light. You are the light. Never let anyone—any person or any force—dampen, dim or diminish your light. Study the path of others to make your way easier and more abundant. Lean toward the whispers of your own heart, discover the universal truth, and follow its dictates. […] Release the need to hate, to harbor division, and the enticement of revenge. Release all bitterness. Hold only love, only peace in your heart, knowing that the battle of good to overcome evil is already won. Choose confrontation wisely, but when it is your time don't be afraid to stand up, speak up, and speak out against injustice. And if you follow your truth down road to peace and the affirmation of love, if you shine like a beacon for all to see, then the poetry of all the great dreamers and philosophers is yours to manifest in a nation, a world community, and a Beloved Community that is finally at peace with itself.” ~ John Lewis