Laughing at the sky

In January, I claimed this the year of happiness, damn it. In reality, it's been the year of radical acceptance and transformation. Doing Deepak Chopra's 21 days of meditation, hearing day 18's message was like peeling off dead skin from a sunburn before it was ready to come off. I can feel the skin underneath, red and raw but then after a day or so my body adapts and the old and new skin appears one and the same.

Titled "Miraculous Independence", the mantra for that day was "All I seek is within". In other words, the love we're seeking is already within us. It's ironic that I know this and still to hear it this particular time in this exact way was so earth shaking. Sometimes I have to hear a message over and over for it to penetrate my soul.
This is worth repeating: all you desire is already in you. Wholeness doesn't come from another person or thing or with someone doing your work for you. You are already complete.

Healing happens when I begin to see and treat myself as if I were the most precious being on the planet. Because I am. And, so are you. So what's holding you back from taking flight, precious one other than the obstacles that you perceive to be in the way?

With inbox at 650 messages and over 150 unread, I sit to pick my way through what is urgent and what is not. I pass quickly over an email that I flagged a while back from a dear friend and author who often sends me a note of encouragement. Here is what she shared about struggles and transformation that inspires me to continue to fly, this time minus the sunburn effect. I openly receive everything I need. 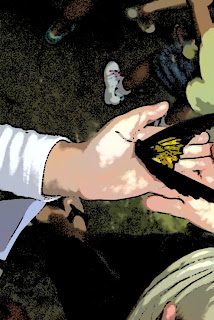 "One day a small opening appeared in a cocoon.  A man sat and watched the new butterfly for several hours as it struggled to force its body through that little hole.  Then it seemed to stop making any progress.  It appeared as if it had gotten as far as it could and it could go no further.  So the man decided to help the butterfly, he took a pair of scissors and snipped off the remaining bit of the cocoon. The butterfly then emerged easily.  But is had a swollen body and small, shriveled wings.  The man continued to watch the butterfly because he expected that at any moment, the wings would enlarge and expand to be able to support the body which would contract in time.  Neither happened.  In fact, the butterfly spent the rest of its life crawling around with a swollen body and shriveled wings it never was able to fly.

What the man in his kindness and haste did not understand was that the restricting cocoon and the struggle required for the butterfly to get through the tiny opening were Nature’s way of forcing fluid from the body of the butterfly into its wings so that it would be ready for flight once it achieved its freedom from the cocoon. Sometimes struggles are exactly what we need in our life.  If we all went through our life without any obstacles, it would cripple us.  We would not be as strong as what we could have been.  We would never be able to fly."