A month back during the wildly amazing SXSW music festival, on the lawn of the Texas capitol, flipping open my yoga mat, chatting with a friend, looking over at the stage that was being set up for a peaceful yoga protest, I saw a book laying there by David Berkeley. 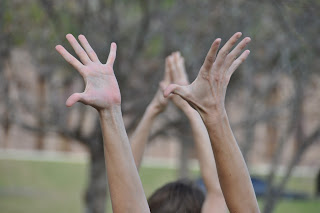 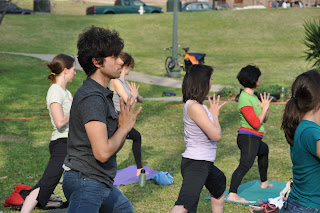 Alright, let's briefly address the peaceful protest part. First, off I can't believe I'm just about 40 years old and this is my first protest at the capitol! Well, I suppose if you're going to stand up for something close to your heart and part of your livelyhood, might as well be Yoga while doing Yoga, right? If you practice or even read this blog, you should know about this. It's affecting every state, not only Texas. Learn more now, join the TYA (Texas Yoga Association) and sign a petition that will help keep yoga studios in business, avoid huge fees, and keep them from being "regulated". 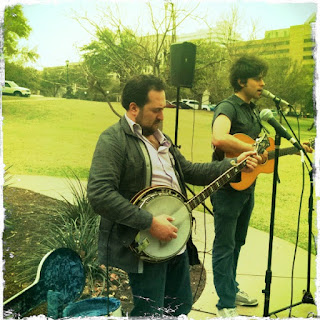 Back to the afternoon on the lawn... when I glimpsed David Berkeley's new book which he wrote about songs in his current album, Some Kind of Cure, I went on and on about how I love David's music and first saw him when he played an intimate performance for a gathering of less than 20 folks at Curayoga (formerly Jennyoga) about 2 years ago. While I'm gushing about him, claiming Loves the Only Thing that Shuts Me Up is on the top of my all time favorite songs along with High Heals and All, up pops David, he was bent over untangling chords. I didn't realize he was doing a benefit concert for the TYA. I felt like I was 14, blushing about how I had confessed my not so secret crush out loud. The only thing I have to compare it with is a little crush I had on another David: David Cassidy back in the butterfly bellbottoms and Partridge Family days, only I never got to meet my "idol".

His book, 140 Goats & A Guitar is the backstory behind the songs of his latest album. He's got a lovely wife (felt I had to say that for those of you wondering where this crush thing was going) who's career took them to the island of Corsica (which explains the goats). I'm such a sucker for the background story of how a creative person is influenced... it draws me in. Makes it personal, real. I'm curious about how musicians can create and collaborate to make something that makes you stop whatever it is you're doing and listen. Really listen. These people of passion move me.

Digging deeper into his book, he describes how frustrating the oddities of living in Corsica were: the language barrier, slow pace of life, and disheartened feelings of loneliness and isolation. And yet, he writes, "still when we left the island, I found myself missing it powerfully, like I had woken from a long and mysterious dream and wanted to get back to sleep so I could explore it more."

I feel this way about Asia and India and many of my travels... and even about my youth in Oklahoma and most assuredly about my newly wed days in New Orleans. I used to joke that it was so hard that after living in New Orleans as a transplant, I can live anywhere. There are periods when I uprooted and moved to "foreign lands" (Arkansas counts in this category. Trust me.) and felt so empty until I chose to just surrender, be a friend, and open up to service to God and others. Then, and only then did the strange place become wonderful and in some cases magical.


"There is a theme that runs through a lot of my music," David writes. "It has to do with the relationship between the very personal and the universal. There are times when the two are totally disjointed. Bad things happen to you on a perfectly beautiful day. At times like these we can feel very small, very alone. Other times, things feel in synch. The universe seems to amplify or echo your thoughts and moods."


The tone and lyrics of his music, in my opinion, tends to have a melancholy, almost forlorn feeling them to them. And most center on relationships. Some are about a kind of love. Right now I'm reading about this song... and it feels hopeful. Wistful. Like a rebirth.

"The Blood and Wine"


Tell me that you still remember
When we caught lightning in a jar.


There were times when you were hiding.
And, I know I've been hard to hold.


Theres' a blue house in the distance.
There's a stream beside it, too.