Everyone warns of the possible trials in India: personal safety, scams, Delhi belly, traffic, and of course daily frustrations that come with foreign cultural differences. My India challenges started before I even left. I had hoped that all my "lessons" were learned before I boarded the plane. Getting any personal purification out of the way before departure seemed like a good compromise for all the drama I faced in planning my journey.

I knew I wanted to stay in an Ashram, a place where devotees go to learn from a guru or teacher, but i didn't know anything about Parmarth prior to going other than what I read on line. And, even that I didn't read very carefully, or I would have thought to bring the white tunics and pants that they required students enrolled in courses to wear. I ended up there by recommendation from an Indian friend, raised in the US who doesn't even like ashrams. Even after recommending it, she cautioned without explanation, that she heard there was "trouble" there. My other option was in Haridare (an organic farm/ashram isolated in the country side with no set class instruction). My third option, an Ashram in Rishikesh, who never responded to an email but did answer when I called them from the US. The gentleman took about 10 minutes to gather my full name and specific dates of arrival & departure. Then without answering my questions, abruptly ended our conversation with "OK, Mona Lisa, we see you November." Hum. Crossed that one off the list. Feeling options were limited, I went boldly with my intuition to the one where there was possible "trouble" of some kind. Ignorance is bliss, right? Destination set. Then, a few days prior to departure, I was confirming my ride/driver from the airport to the Rishikesh that Parmarth had recommended and found out my driver had "met an untimely death in an auto accident". Plan B: I went armed with simple instructions on how to ride the train instead (see my first India post on how that panned out!).
Safely arriving by train to Parmarth with my new friend and soon to be roommate, Denise, we were both awed by the beauty of it. The ashram opened up to a view of an enormous statue of Lord Shiva in the Ganga River to one side, and the other held a view of the mountainous foothills. Lush with flowers and statues of deities, it seemed more like a large spread out college campus than it did a humble holy place. The rooms were pretty bare yet functional with a thin mattress pad, leaky faucet and cold showers in the same stall as the toilet (although we were told it was intended to be hot). We had to take care to remove the toilet paper before showering. Showers aside, we stayed. 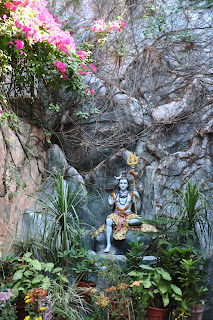 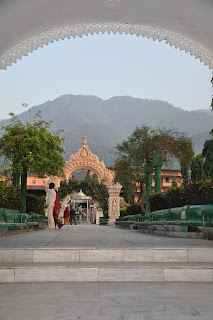 Our Kryia classes were held in the far back lot beyond the back alley of the Ashram. The yoga room was incredibly spacious and oddly enough the space seemed to generate more dirt than we thought possible to bring in on a daily basis. Most afternoons after our chanting class, our younger teacher, Indu asked us to do Seva, or service by sweeping and mopping the floors. The first day took us almost 45 minutes just to sweep. We had to learn to use the brooms which were basically twigs bundled together. In the 3 plus years I lived in Kuala Lumpur, I never understood how to properly use it, thinking it was a ridiculous endeavor. The trick is to squat down duck-like and waddle along and sweeping sideways. A little wiser and faster each day, we used our twig brooms and squeegee mops (literally like the things you use to clean your car windshield) to move the dirt around. Indu said to us the first day, "When you clean the floors, you are actually cleaning your heart." It certainly made the task more cheerful. And, since we got to splash the water about, it was even mildly fun. Well, as much fun as mopping can be while cleaning our hearts. The real purification began.