Yoga is the practice of life 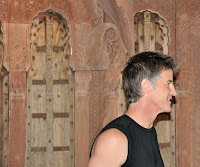 "Yoga is the practice of Life."-- Kurt Johnsen
At the TYA Dallas Conference, I was privileged to take a workshop from Kurt Johnsen. I was a little embarrassed when my friend Lisa introduced me, I didn't know his name and even asked if he was from Houston (although I knew about his studios and yoga style he created, American Power Yoga which originated in Dallas).
His class theme focused a lot on his martial arts background, his beliefs, and theories on energy. He began by asking us what is yoga? Which is interesting because I just asked my group of teenagers that I've been teaching yoga to this same question just a few days prior. They came up with answers like: it's harder than you think, breathing, a way to relax & exercise (hum, after just 8 weeks with them, I still have a ways to go... but at least they no longer think that yoga is "for girls".)
His answer: "Yoga is connection with reality." Then, he challenged us to 21 days (the amount of time it takes to form a habit) without arguing with reality. For example, to not get upset about the weather (It's hot in Texas! Just deal with it without complaining about it!), not get angry over traffic or being late (traffic happens, so just plan for it), to get over rude people (there are people who will be rude, but you don't have to re-act to them). When we argue, we lose energy. Instead, embrace reality and feel the energy of it because whatever is happening is there for a reason. He invited us to get our kids or someone to help remind us. (I opted for a friend for encouragement and accountability. My kids already point out my infractions with ease.) Other advise, don't be a door mat while doing this. If you get a bad meal, just send it back but don't whine over it. Be gracious, kind and matter-of-fact. If you switch sides of energy, start again. (This is a bit like the tongue mudra (bite it!) that judith lasater challenged me to in January.)
Here's my start: OK, it's Thursday night, this began Sunday.... and I've had to start over every single day... I've gone to the dark side of energy. Sunday, complained about family. Monday, grumpy and tired after arriving home at 4am and told people I was grumpy and tired. Tuesday, got a speeding ticket and well, I argued with the policeman. Was I really going 50 in a 35? According to her radar. Wednesday. Actually I can't remember Wednesday, but I'm sure it was something! Today, I was hoping for some help with xyz....grumble, grumble. Sigh. So, tomorrow's a new day. Day one again of 21 days. (A bit like the "ground hog day" movie.) Kurt said it took him 4 months the first time to get through 21 days straight. And, now each time, it's gotten shorter & easier. I sincerely hope so!
Labels: kurt in the Crow Museum in Dallas