Courage-- From the Heart 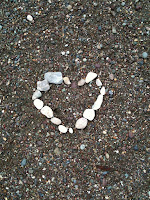 Courage
Watching the boys chase the waves while in California last week, I looked down, and there was a small red-ish stone in the shape of a heart. So, I formed a small heart out of white stones. A woman walked up to me just as I was finishing. She explained that she's a local artist and collects heart shaped stones. She comes out regularly just to see what she can find. She said she rarely finds one as perfectly shaped as the one I found. Taking a photo of my creation, I reached down, and handed her the stone. Touched, she asked my name and said when she looked at it, she will remember the simple gesture of kindness. Then she continued her search along the shore. I've always been a believer in serendipity. When you're aware and open to it... beautiful things can and do happen.
While in Portland, I went to possibly the greatest bookstore I've ever been to, Powell's. It's so dense that I think I could have spent all day there-- and a lot of money, I'm sure. Found a book by Osho, Courage. The Joy of Living Dangerously. Coincidentally, (serendipity!) as encouragement, Stephanie emailed a quote from this book shortly after. This theme was woven into my Oregon experience again and again. And, now at home. I find myself clinging to it.
"The word courage... comes from a Latin root cor, meaning "heart". So to be courageous means to live with the heart. The way of the heart is the way of courage. It is to live in insecurity; it is to live in love, and trust; it is to move in the unknown. It is leaving the past and allowing the future to be. Courage is to move on dangerous paths. Life is dangerous, and only cowards can avoid the danger-
...A person who is alive, really alive, vitally alive, will always move into the unknown. There is danger there, but he will take the risk. The heart is always ready to the take the risk, the heart is a gambler. The head is a businessman. The heart is non calculating.
...the heart dreams about the future. The future is yet to be. The future has yet a possibility-- it will come, it is already coming. Every moment the future is becoming the present, and the present is becoming the past. The past has no possibility, it has been used. You have already moved away from it--... The future is like a seed; it is coming, ever coming, always reaching and meeting with the present. The present is nothing but a movement into the future. It is the step that you have already taken; it is going into the future."
Living each day with heart,
Melissa
Labels: Cambria Beach