Day 15: Gratitude Journal, the song of my soul through poetry 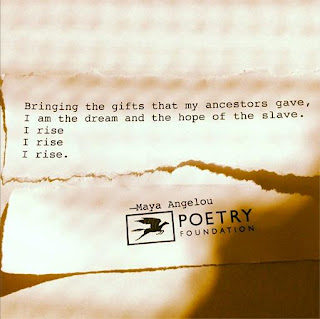 "A poet's work is to name the unnameable, to point at frauds, to take sides, start arguments, shape the world, and stop it going to sleep." Salman Rushdie.

Today, I am grateful for the written word. When I sit to write and no words come which is frequent, there is always Yoga. Movement. Breath. Music. Words. I covet inspiration that I get from the written word. Addicted to self study and spiritual understanding... poetry reaches a part of me that other methods simply cannot.

Poetry brings to life what is hidden beneath the layers of my protective heart, expressing songs that my soul sings. Offering comfort and a familiarity that I cannot often convey articulately, I am instantly transported to a moment in my life where I stood just where the author did. I can feel his empathy. Together, we dance and move in and between the words strung together as if it was exclusively for me. To me.

Rumi is stirring but if you're getting all your inspiration from him, the Dali Lama, Mary Oliver, or Hafiz on Facebook, then you're missing out on some of the lesser known, most influential writings of our time. These poets explore love, lust, the meaning of life and even details that you'd swear gave them a voyeuristic view into your own life.

Feast on the words of these inspirational poets. (#3 on this list is my personal favorite.)

1. Randall Mann, author of Complaint in the Garden (2004), winner of the Kenyon Review Prize in Poetry writes with brave vulnerability. In response to critics who say that his openly gay references in his writings are bold, Mann responds, “If tenderness between two men is radical—and I suppose it is—then the shameful world needs a new radicalism.”

Something has to give.
We stand above it all.
Below, the buildings' tall
but tiny narrative.


The water's always near,
you say. And so are you,
for now. It has to do.
There's little left to fear.


A wind so cold, one might
forget that winter's gone.
The city lights are on
for us, to us, tonight.

2. Richard Blanco, the youngest, and one of only 6 poets in history to share poetry at the president's inaugural address.

3. David Whyte, writes with clarity, sensitivity and depth that pricks at my heart with every single poem. I am anxiously awaiting his new book.

FORGIVENESS
is a heartache and difficult to achieve because strangely, the act of forgiveness not only refuses to eliminate the original wound, but actually draws us closer to its source. To approach forgiveness is to close in on the nature of the hurt itself, the only remedy being, as we approach its raw center, to reimagine our relation to it.

Forgiveness is a skill, a way of preserving clarity, sanity and generosity in an individual life, a beautiful question and a way of shaping the mind to a future we want for ourselves; an admittance that if forgiveness comes through understanding, and if understanding is just a matter of time and application then we might as well begin forgiving right at the beginning of any drama, rather than put ourselves through the full cycle of festering, incapacitation, reluctant healing and eventual blessing.

…at the end of life, the wish to be forgiven is ultimately the chief desire of almost every human being. In refusing to wait; in extending forgiveness to others now, we begin the long journey of becoming the person who will be large enough, able enough and generous enough to receive, at our very end, that necessary absolution ourselves.

Excerpted from ‘FORGIVENESS’ From the upcoming book of essays CONSOLATIONS: The Solace, Nourishment and Underlying Meaning of Everyday Words. ©2014 David Whyte

Join 30 days of Radical Gratitude and Love and write your own poem or stanza or simply one word that is the song of your heart today.