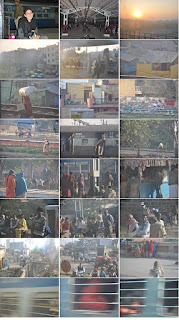 I've had it on my heart to go to India since I was 18. I was living with my father in Hong Kong at the time and he had just returned from a trip to the Taj, and I was so envious. It was during the Gulf War, so we were not able to travel, or at least my father didn't feel like it was a good idea. Safety aside, I actually think he just didn't want to make the journey again. And, he certainly wouldn't allow me to travel on my own, and I never thought to ask. My father, step-mom and I did make it to Nepal, however, and after a trek up the foothills in Katmandu, I got the dreaded stomach virus (Dehli belly, all same, same), and consequently, spent the next several days after an elephant ride, going between the tent and the toliet. I still loved the adventure of it all and in the back of my mind, dreamed about going again. 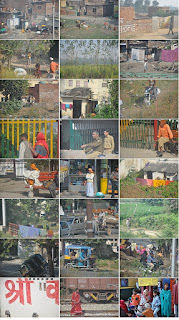 Almost 2 years ago, I signed up and paid in full to go to India with a group from an American yoga organization but then when the trip neared they suddenly claimed that they lost my paperwork and was not allowed to attend. This turned into the biggest blessing. After having been to India now on my own, I cannot fathom going with a group of Americans just like me and not getting to experience all the different classes, teachings and places I saw. The most incredible part of the journey was the day by day serendipitous crossing of paths with people from all over the world.
On the flight over, I sat between 2 Indian gentleman, one who lived in the US working for a large American corporation coming to Delhi to visit his mum and the other man, with limited English, worked for an Indian corporation and was proudly returning from his second trip abroad. Both took it upon themselves to scrutinize my itenerary and decided that my plan to get a train this late was not a good one. I mistakenly thought I could just buy a train ticket upon arrival (in the middle of the night?!). New plan: spend the night in the airport, get 4am prepaid taxi to the New Delhi station, train to Haridware, taxi to Rishikesh.
The Delhi airport is new and just completed this year, so the masses of people I was expecting was not there when I arrived at 10.30pm. Turns out you have to purchase a ticket to get into the arrival area of the airport, which keeps things quite peaceful. I met a lovely woman from Calcutta who joined me for a coffee (my last for the next 3 weeks), and we talked for hours about Indian social issues to stay awake. 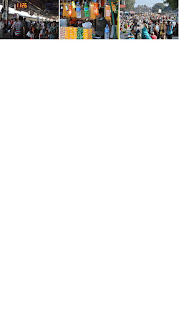 4am: taxi to the train station where there were squatters everywhere. I didn't know where to go, so I headed straight for the Entry sign and was stopped and asked where my ticket was (funny he didn't stop anyone else)? He ushered me over to another man, "Babaji" on the other end of the station who then took me across the street to a place that simply said "office" and assured me I could get a ticket there (but only after he tried to put me into a taxi to another office!). I had an enourmous pepto-bismal pink backback strapped on and had to climb stairs that seemed to completely verticle in a dark hall with no railing. Reaching the dim lit office, there was a small man with wirey glasses who told me to take a seat, take a seat. Babaji disappeared while the small man called about a ticket for the train. No tickets. I said, please call again. After another unsuccessful call, he suggested a taxi to Haridwar at the cost of 9900RS! Crazy! I said no thanks and just at that moment a very, very large rat scurried over my foot. Small man didn't even blink. No problem, he said, as he wabbled his head. Finally realzing the scam, I head back across the street to the "Indian" ticket windows. (Why I didn't see this the first time, I don't know.) The woman behind the counter said, no tickets, I must go to the foriegn ticket office which opens at 8am. It's just 5am at this point. Trying not to panic, I go once again past the squatters and beggars and march up the stairs to the foreign office and determine to stand there by the door til 8am, which would mean missing my train (6.30am). Another man comes along with a key to open the foreign office, so I ask him to help me, he then ushers me down to another person... another scam. So, I approach the woman again at the ticket window, I plead that there must be some way. I believe there is a way. She says no, again. I walk back to a corner and survey the area... no way in hell, I decided, am I going to stand here all morning. I go back the woman, and plead again. She rolls her eyes and a man comes over to help. After about 15 minutes of not understanding, another passenger took pity on me and helped me understand that he wants to sell me a ticket to Meerut City which is just part way and that once on the train, I can ask for an extension to my destination. At this point, I didn't care if I got stranded in another city, I just wanted to get moving. He sold me a ticket in E class and off I went to find the platform, which incidently, was listed at 17 when there are only 16 platforms. A drunk Londoner took it upon themselves to help me find my way and the first photo at the top is a photo she insisted on taking of me while I waited for the train to finally arrive.
E class tured out to be "Executive" and all those images I had in my mind of masses of people crammed in with cows and such on a train were unfounded (unlike Slum Dog Millionaire). E class was nearly empty and the station master gladly took more money from me to extend my journey to my destination.
I spent the entire 5 hours taking photos from my view in E class to stay awake. (At this point I'd been awake more than 24 hours). The last thirty minutes of the ride, an beautiful American woman, approached me and asked where I was traveling to. Turns out, we were both going not only to Rishikesh, but to the same ashram.We navigated our way to a prepaid taxi with the help of 2 Austrailian women in their 70's headed to yet another ashram. It flashed in my mind, that I hope to god that I'm able to travel like these 2 ladies one day. (The last photo is of the train station in Haridware.) Another hour in a taxi "up the hill and down the hill", and we arrived at Parmarth Niketan Ashram, my home for the next 14 days.
I sounds like a lot of hassel, but I loved every second- perhaps next time, though, I'll prebook my train ticket.
Labels: train to Haridwar