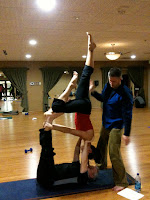 "Don't create artificial barriers to yoga, so that you don't want to come back to the mat." JL
Fitness Fusion... yoga sculpt (yoga with hand weights), PiYo (pilates and yoga), Yogalates (yoga and pilates), Chi yoga ( Tai Chi and yoga), yoga on the reformer (pilates reformer and yoga), acroyoga (yoga acrobatics) and yoga strength (with resistance bands), and now... drum roll, please: Yoga + Rollerblading = mobile yoga and Yoga + Wine + Chocolate= yoga for foodies. Really? I'm sure if you googled it, it would be no less than a 100 different combinations of yoga + ...
What happened to just doing yoga asanas? Isn't it enough? Do we have to add so much fluff to popularize it? Students have a hard enough time when they're new to yoga just trying to figure out differences between Yin, Restorative, Vinyasa, Ashtanga and Hatha Yoga.
It's yoga after-all and why not be willing, with an open heart to whatever may come. It's best not to take it too seriously. Be willing to laugh, try and experiment. Not so sure I'm willing to give rolleryoga a try, but yoga and chocolate... that sounds pretty good.
Labels: acroyoga